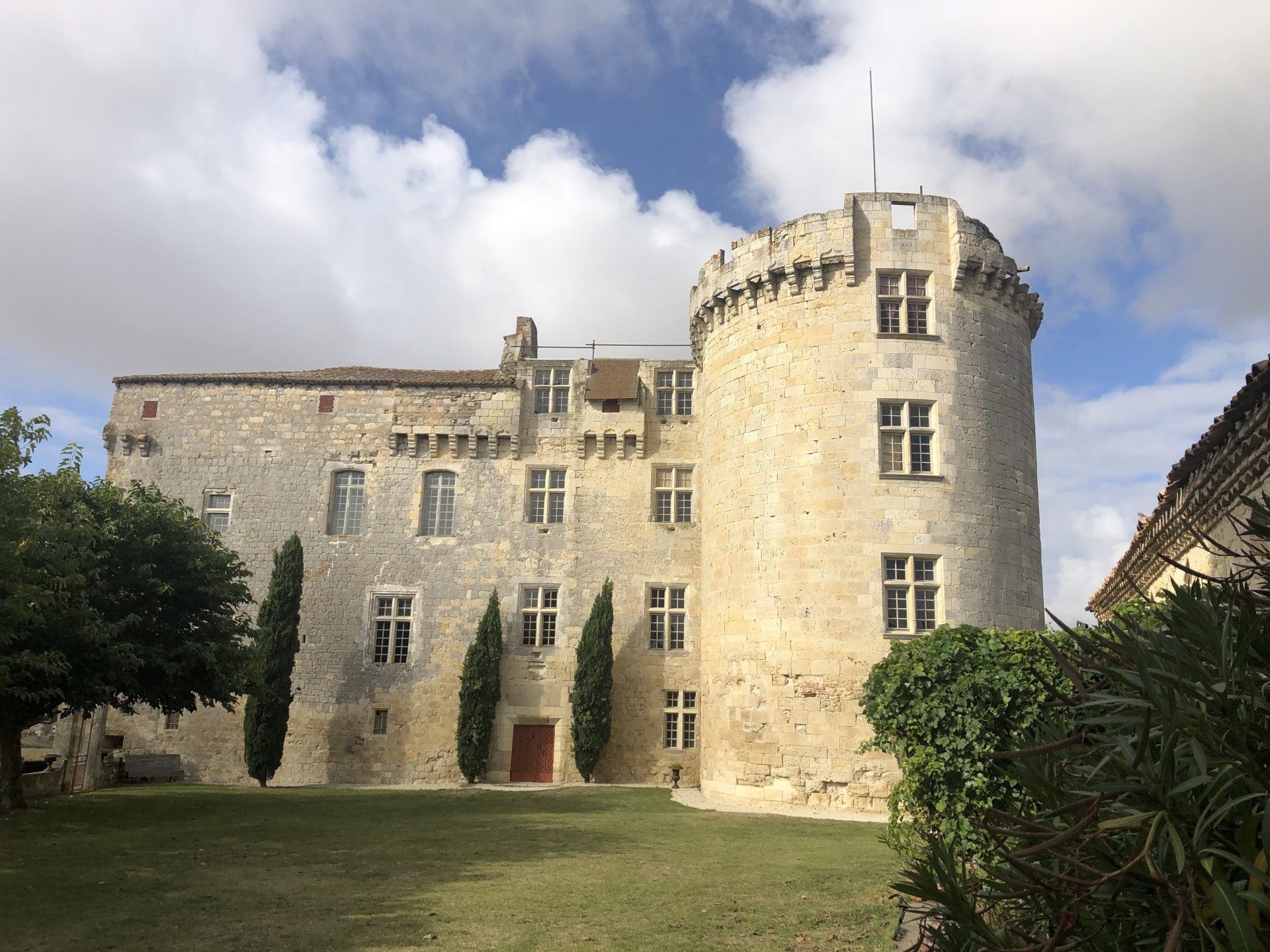 It seems that I am not alone in dreaming of one day rescuing a derelict but beautiful old castle and bringing it back to life.  If the popularity of Dick and Angel Strawbridge’s Escape to the Chateau TV programmes are anything to go by, it would seem that half the UK have the same fantasy, whilst hundreds of others have taken the plunge and bought their own tumble-down chateaux in France and are discovering the pain and expense of falling in love with such a demanding mistress.

But such passion, or folly depending on how you look at it, is not a new phenomenon.  Here in Flamarens, the tiny village high on the hill is dominated by a fairy tale 13th century chateau. Abandoned in the 1930s, it caught fire when struck by lightening in 1943 and lost its beautiful pointed turret roofs.  It suffered further indignities in the 1960s when anything that could be sold – marble fire places, tiles, floors, beams – was sold.

In 1983, when at the point in the fairy story where the brambles begin to grow and cover the ruins of the castle so that it falls from view forever, along came a Parisian Advertising Executive.  Jacques Gadel bought the ruins and spent the last 27 years of his life restoring the fabric of the building, helped by his children whenever they could take holidays from their work.  For the last 10 years the reins have passed to Jacques son, Arthur who with his wife Marie-Hélène continues the restoration project.  The work is never ending. But as the years pass and more ceilings are reconstructed, more floors are re-laid and tiled and more hidden architectural treasures are uncovered, echoes of the chateau’s glorious past are slowly being bought back to life.

Much has happened during the 700-year history of the Château de Flamarens which was part of the wedding dowry of the niece of Pope Clement V.  Used as a fortress during the 100 years war between England and France, it became in 1466 the home of the aristocratic Grossoles family, who extended the chateau with the addition of a main building 3 floors high, a dungeon and the huge tower.

The brilliant and famous lineage was a succession of larger than life characters, one was sent in to exile in Spain after taking part in a duel, another a Bishop who was also a Master Builder responsible for much of the building of the Cathedral at Condom and another was a Knight.  But it was marriage to a cousin of Henri IV that saw the family become part of the lineage of the Bourbon Kings of France.

Its heyday was probably the 18th Century when it was the favoured residence of Marquise Marie-Françoise de Flamarens, a relative of Madame de Sévigné, the famous chronicler of life at the court of the Sun King, Louis XIV.  The chateau was then reputed to ‘beautiful inside and out’ and one can only begin to imagine the parties, and entertainments within the castle walls and the carriages arriving along the narrow main street turning into the place in front of the chateau gates  where one now finds the restored ruins of the beautiful church of Saint Saturnin.  Or the fear at the time of the French Revolution, when the family fled to Germany to save their heads.

Sadly the chateau fell out of favour and was sold in 1882 when the house of Grassoles died out after providing 15 generations of highly distinguished lords, the Marquis de Flamarens.  The new owners, the Galard-Magnas  family, could not afford to maintain it and with the roof in a poor state of repair and no finances to address it, they had no option but to abandon the chateau in the 1930s having previously tried to sell it.  They even considered giving it to the State in 1939 but the fire destroyed all hope of repair and the castle was a forlorn sight.

It would be over 50 years before the chateau was to be inhabited again.

Now, as in times gone by, the chateau remains the focus of the village and provides the backdrop to many events from outdoor concerts, to historical re-enactments, weddings and festivals.  It also provides a thrilling place for pilgrims walking to Santiago de Compostela to spend the night.

And this Summer is no exception.  Beginning on Thursday 23rd July are a series of musical events for everyone to enjoy, with guided tour of the chateau taking place beforehand.  What could be a more convivial way to spend a Summer evening than enjoying music and food with friends, and daydreaming about the past?

with special thanks to Arthur and Marie-Hélène Gadel  for  their help and patience.