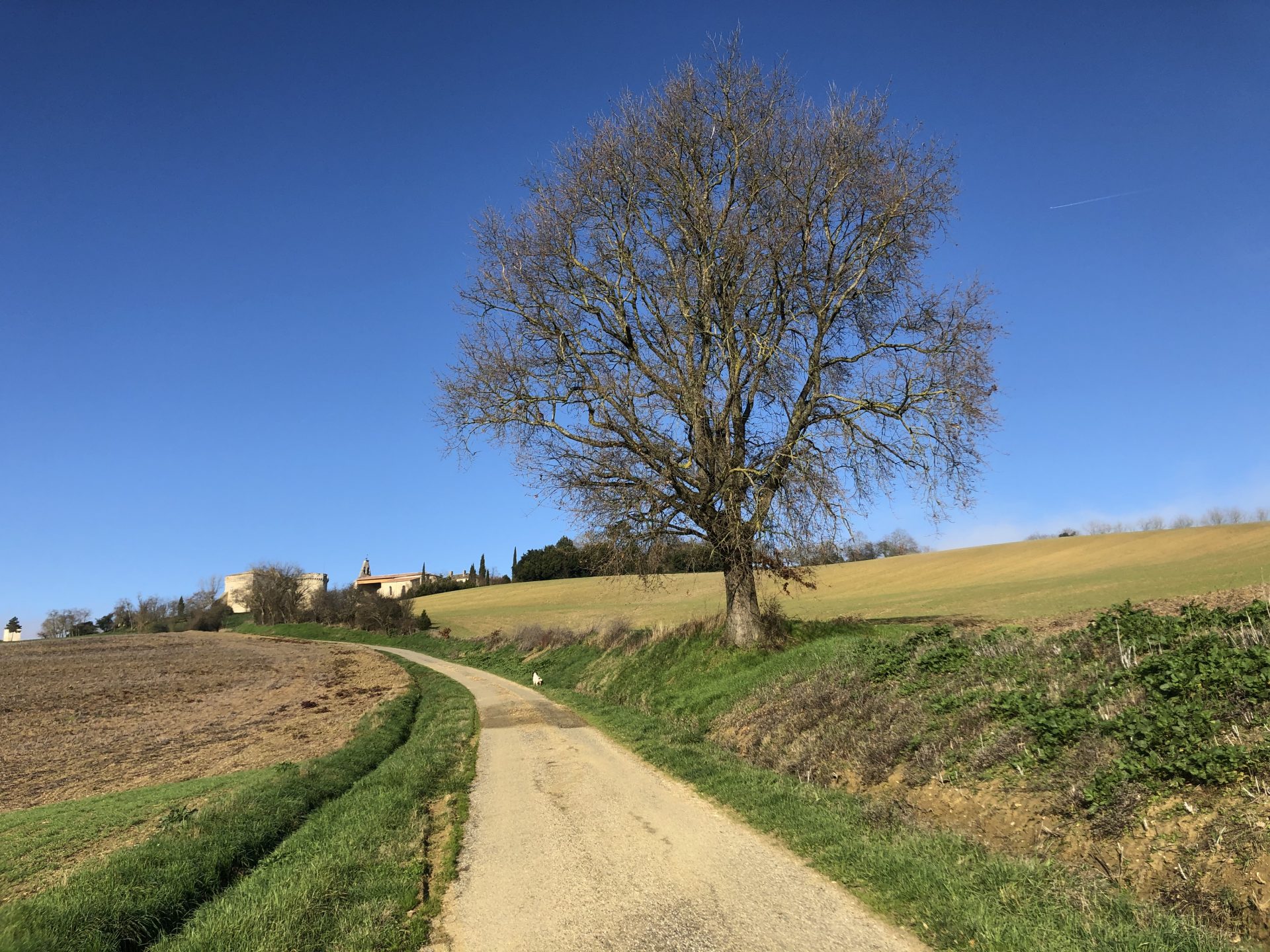 It’s only two weeks into January, but already the first tang of Spring is in the air on some mornings as Bertie and I walk across the fields up to the village.  There’s lots of buds on the trees too.  But as we walk up the hill under the ruins of the ancient church of Saint Saturnin you can still hear the dulcet tones of Michel Berger singing Le Paradis Blanc.  Although the crowds arriving in coaches have gone, people are still turning up to visit Flamarens’ contribution to the Rondes des Creches.

The Rondes des Creches which starts at the beginning of December is a spectacle that brings over 20,000 visitors to our little village and seven other villages in the locality that every year create tableaux which include a Nativity around an agreed theme.  Now in its 25th year, this year’s theme was Habitats from around the World which included Norwegian fishermen’s houses, Indonesian bamboo huts, Mongolian yurts, Eskimo igloos and a Berber village in the Sahara. It’s a fun activity for the whole family, a cross between a treasure hunt and the ‘It’s a Small World’ ride at Disney and particularly magical after dark, with villagers providing stalls selling local produce and serving hot crepes and mulled wine.

Christmas starts slowly in France, much more understated than in the UK where everyone seems to have their trees up before the end of November.  Consequently, whereas in the UK all decorations are taken down by 12th night, or in the case of many Boxing Day, here everything is much more laid back and most shops are still decorated with the lights and tinsel and full of Christmas treats.   When buying notepaper today in my local Presse, I noticed that although they were selling beautiful Greetings Cards at reduced prices, Christmas Cards were still available and full price.

In January the French celebrate the arrival of the Three Kings with Galettes des Roi, a flaky pastry confection filled with gooey almond frangipane.  The whole family and friends gather round for a Sunday tea and the large cake is cut into slices. A neighbour who invited me round to partake in the tradition told me that a child sits under the table and shouts out the name of the person who will receive the first slice of the special cake, and then the second and the third and so on until everyone has their cake.  Hidden somewhere in one of the slices is a small china ornament or a bean, a bit like a sixpence in a Plum Pudding and whoever has the charm is crowned King or Queen for the day.

Eating Galettes des Roi carries on right the way through January and makes starting a New Year diet very difficult, especially as they are also sold by the slice at Boulangeries, so have to be studiously ignored when buying your bread.  I gave way today (again) and bought another slice – it is after all, almost the weekend and maybe the beginning of February with nights beginning to lighten is a better time to start to diet.

It will also be time to start getting things moving up a gear and get things ready for Spring and Summer.  I can’t believe that today I was discussing with Thierry when we shall re-open the pool – it has to be March – a hardy soul like me sees it as a matter of honour to have at least one swim in March and another one in November whether or not Summer arrives early or stays late.  But before then, there’s plenty to sort in the garden to make everything perfect for our 2020 guests.