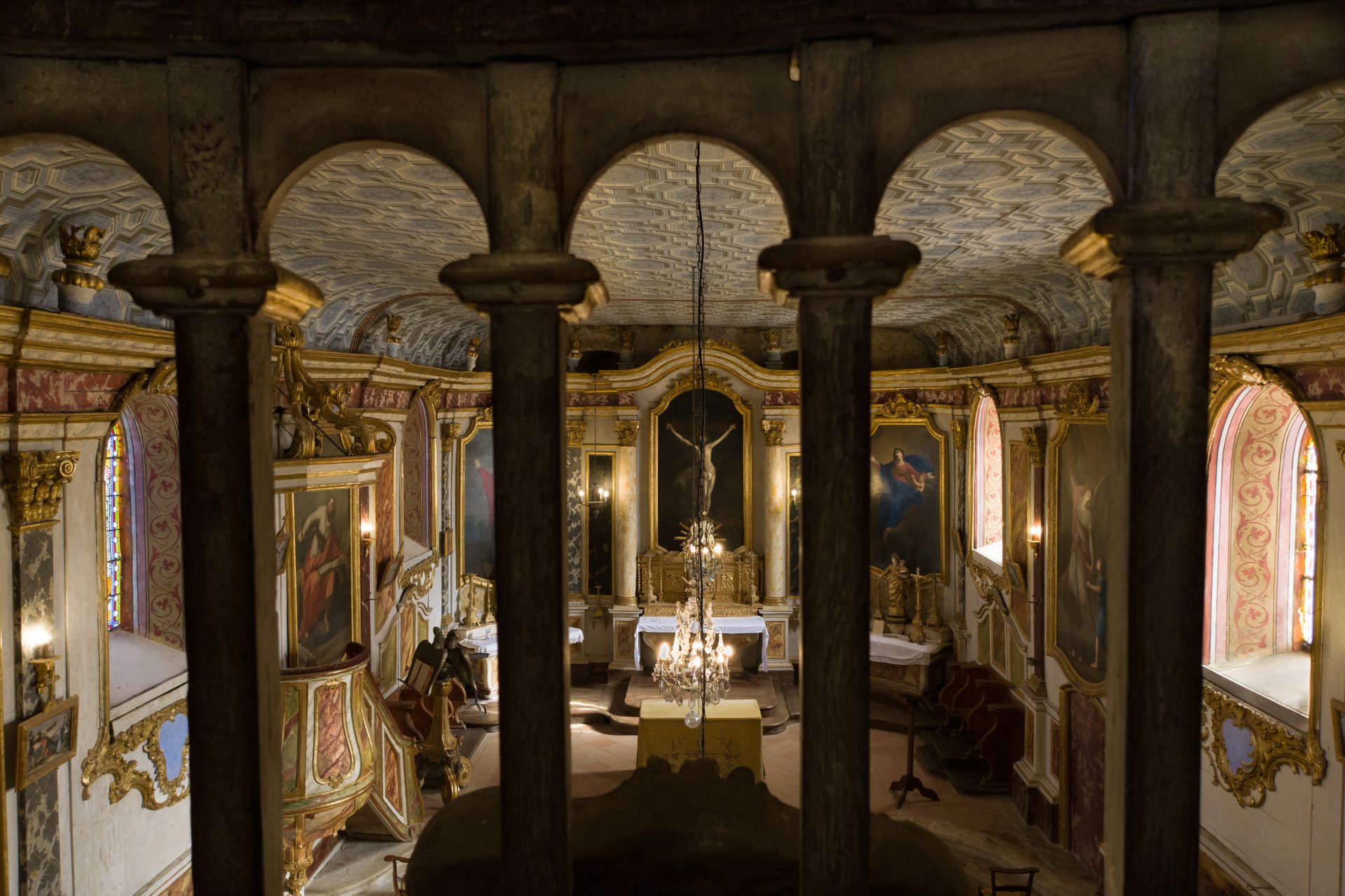 Maison Lamothe sits in a hollow surrounded by rolling hills.  Look one way and you see up towards the village topped with its Sleeping Beauty Castle, look another and you can see in the distance Lachapelle, another tiny Lomagne village of 120 or so inhabitants, a cluster of houses and a church.  It looks like several other villages you can see from up on the ridge, but as they say ‘Never judge a book by its cover,’ and so it is with Lachapelle which has treasure its midst.

The Lomagne region of Gascony which encompasses the towns and villages in the north east of the Gers and south west of Tarn et Garonne was once a frontier which needed to be heavily defended against invaders – the French, the English, as well as power grabbing neighbours.  Reminders of these times and the squirmishes that ensued are everywhere in the numerous fortified castles and bastides.

Lachapelle, like Flamarens, sits on top of a hillock, its houses adjoining the castle where the old fortifications are visible.  The village then known as Sant-Alari was destroyed during the Hundred Years War and rebuilt around the castle ruins.  The castle chapel became the parish church of St Peter.  Peace restored, Lachapelle prospered and St Peter’s church congregation grew.

This sombre 15th century church with its bell turret looks just like lots of others hereabouts, but step into the covered porch and through the simple battered wooden door and you’ll find yourself somewhere very unique.

When Jean-Baptiste Goulard arrived as priest in 1746, he was somewhat dismayed to find that the tiny church could hardly accommodate his flock and that life in this simple village was so very different from the glories of Rome where he had studied theology and been ordained as a priest.  But he was Lomagne born and bred and it was in the Lomagne that he would see out his days.  Ten years or so after his arrival his younger brother Jean joined him as vicar.

How did their conversations go regarding the cramped and tired conditions of their church?  What fantasies did they harbour when they visited the great cathedrals of Moissac, Lectoure and Condom? How many times did Jean listen to his older brother’s recounting tales of the magnificence of the Vatican and Rome?

But the Goulard brothers were not any old parish priests, they were from a very distinguished family and when their father died, their substantial inheritance gave them the financial means to realise their dreams and to secure their place in Heaven.  They would redecorate the interior of their dreary church.

But how could they make it less cramped and pack in as many of their flock as possible?  They enlisted the assistance of local craftsmen including Maraignon dit Champaigne, a master carpenter cabinetmaker from Lectoure.

Starting with the High Altar in 1761, the work began and an interior of the highest Baroque order began to be fashioned with moulded woodwork adorned with Corinthian columns topped with pots of fire.  Gold, gold and more gold everywhere, crystal chandeliers and huge religious masterpieces befitting of their beautifully sculptured Roccoco frames.

The effect was breath-taking, the brother and their artisans had created in their little village church an interior worthy of the great cathedrals.  But it was the solution to the accommodation of the congregation, that makes Lachapelle truly unique.

After having gasped at the splendour of the altar, turn around.  And there is the breathtaking and surprising answer to the problem of how to cram the village’s then population of 500 or so souls into a tiny space.

Three rows of concave and convex stands, like the alcoves of a Venetian theatre and just as opulent covered in carved wooden cartouches decorated in plants and shells.  When Father Goulard climbed into his ornate pulpit, he really could play to the galleries.

It took 15 years to complete the work which was finished in 1776.  Jean-Baptiste Goulard remained priest at Lachapelle for a further 11 years relishing his endowment and patiently awaiting his transition to Heaven in which, no doubt, he believed he had surely guaranteed his place.

Lachapelle is a leisurely hour or so 5 kms walk from Maison Lamothe (you can drive there in a few minutes) and the church is open every day between 14.00h and 18.00h, as well as 10.00h-12.30h in August and July.  If you can’t wait until then, take a quick look