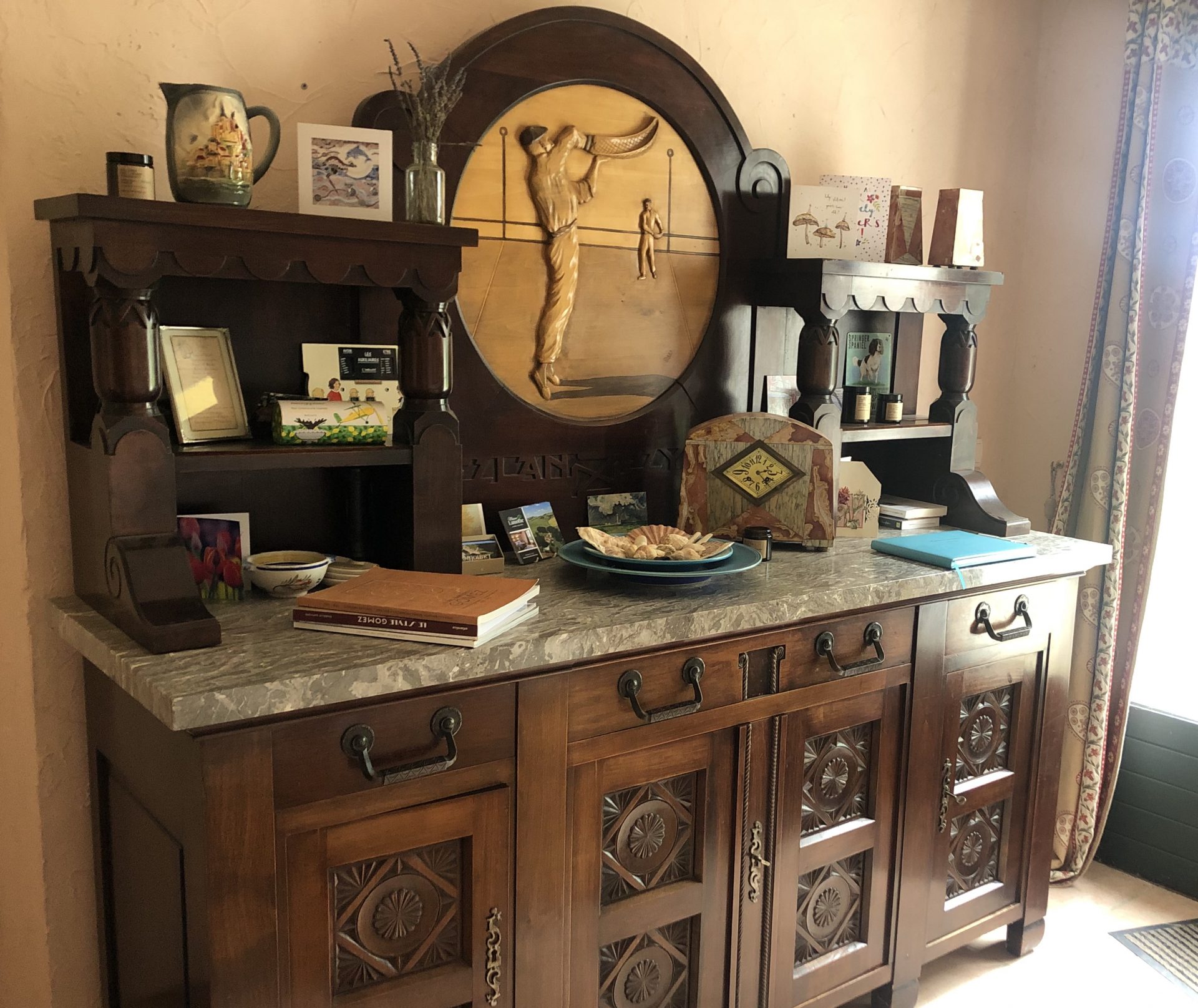 As William Morris once famously said,’ Have nothing in your house that you do not know to be useful, or believe to be beautiful.’ Not a bad maxim, but my own would be, ‘Make your home a haven for treasure with a past and a story to tell.’

Furnishing Maison Lamothe began well before we moved here.  Having spent three years living in rented furnished houses as we road-tested life in France, acquiring more stuff often caused problems. Not that this stopped me.  ‘But it’s so beautiful,’ I would wail to my long-suffering husband, ‘It’s only little. It’ll take up no room at all.’

Small was not an adjective I could have used to justify my purchase in early Spring 2019.    An English couple who were friends of friends were going back to the UK after many years of living in France and were selling off most of their belongings.  ‘I’m just looking,’ I shouted over my shoulder as I left home, ‘just being nosey.’

The couple lived in a large 1930s Art Deco house – not the standard Gascon farmhouse that we Brits all seem drawn towards and I have to admit I was more intrigued to see the house than the stuff for sale.

As ever I got talking and the lady told me about the house’s history.  During WW2 a vet and his family had lived there.  In the town there was a camp known as an ‘Accommodation Centre’ which housed many Jewish refugees who had been expelled or rounded up: many of whom would ultimately end up being deported to the infamous concentration camp at Auschwitz.

According to her, the vet had to care for the Alsatian dogs that guarded the camp.  Throughout the War he managed to smuggle out internees and hide them within the house until they could be found homes.  After the War he was awarded the Legion d’honneur.

I loved the story and found it sad that the people who had bought the house had plans to extend it and modernize it.  There was still an air of the past swirling about the place which had changed little since the 1930s and this was all about to be lost.

Other anecdotes about the house’s other previous occupants followed as we walked through the rooms on the three floors examining furniture that I really did not need or have room for.  I felt almost as if I should buy something, anything, as I had taken up so much of her time.  At which point we entered the downstairs Salon and I was confronted by a huge buffet/sideboard.

It was love at first sight.  Over two metres long and almost as high, this dark stained oak dresser with its marble top was as Art Deco as the house itself.  Best of all was the huge circular relief wooden plaque on the back depicting two men playing Pelote – the national game of the Basque country.   I was immediately transported back to school and being taught about the fiercely independent Pays Basque.

‘No-one wants it,’she said, ‘the new owners want it gone.  It doesn’t fit in with their plans.  And it’s too big for anyone else.  I’ve had plenty of offers for the marble.  For a work top.  But the rest of it’ll have to be smashed up. Such a shame.  It’s been here forever.’

‘It’s got to be rescued.’ I said horrified about what was about to happen.

‘A bargain,’ I told my husband, who agreed that he liked it.  ‘There’s just the problem of moving it and storing it,’ he said.  But I was not going to be fazed by that.  I was safe-guarding History.  What had this buffet witnessed during its 90 odd years of living?

Marco, who fancied himself as a bit of an Antiques expert, having spent years watching the millions of Antique programmes that litter afternoon TV schedules and which obsess the UK, tried to research where the piece may have come from but he drew a blank, even though there were some words written on the backboard and the plaque was signed.

I had more pressing problems as I tried to find someone to move it.  The two expats who did that kind of thing locally agreed to move it into a storage unit, but then when they went to look at it backed out. ‘Why have you bought this heap of junk?’ demanded one, ‘I ain’t gonna break my back trying to shift that.’    Another expat was going to take it to pieces so that it could be moved, but then declared that it was impossible.

In the end, through sheer determination, I employed a proper removal shipping company, who had no problem dissembling the thing, lifting into their van, keeping it in storage and then delivering it here some months later and reassembling it. It cost a small fortune.  I never let anyone know just how much.  The original bill turned out to be just for collection, then there was monthly storage, delivery when we finally found our forever home and reassembly.  But you can’t put a price on love and I loved my Basque buffet.

In the meantime Marco’s research and mine had led us nowhere although we had decided that the bottom was older than the top which was clearly very Art Deco.  We were led by a little hand written Menu card dating back to 1908 which the previous owner had given me and which had been in one of the drawers when she took ownership of it.  And although the two pieces match perfectly colour-wise, we decided that perhaps the top had been built specifically to go with the bottom.

Then a few months ago – on the eve of Lockdown, I made an amazing discovery.  Browsing through a magazine I’d left on top of the buffet, I was distracted by the plaque and the backboard which has the words EZLAN EZYAN engraved on it. I googled the words again and to my surprise I found a picture of a Buffet almost identical to mine.  It had sold at Auction in St Jean de Luz, near Biarritz last April for considerably more than even my extortionate removal bills.

What was more exciting than the value was that it was designed by Benjamin Gomez, who turns out to be one of Bayonne’s most revered sons, an architect, who with his brother Louis is responsible for many of the buildings in Bayonne, Biarritz and the surrounding Department of the Landes.  In 2009 the Basque Museum in Bayonne had a major exhibition of the brothers work, including much of their furniture which was designed specifically for the houses they built.

Indeed, a couple of architectural sketches by Benjamin of a dining room setting which were used as authentication for the buffet that sold were not of that buffet but mine.  And so as the nights draw in and life at Maison Lamothe begins to slow down, I am turning to the project I had hoped to begin in the Spring – discovering the buffet’s story.  And as they always say on Antiques Roadshow when they discover they are the owners of a missing masterpiece, ‘It’s definitely not for sale.’