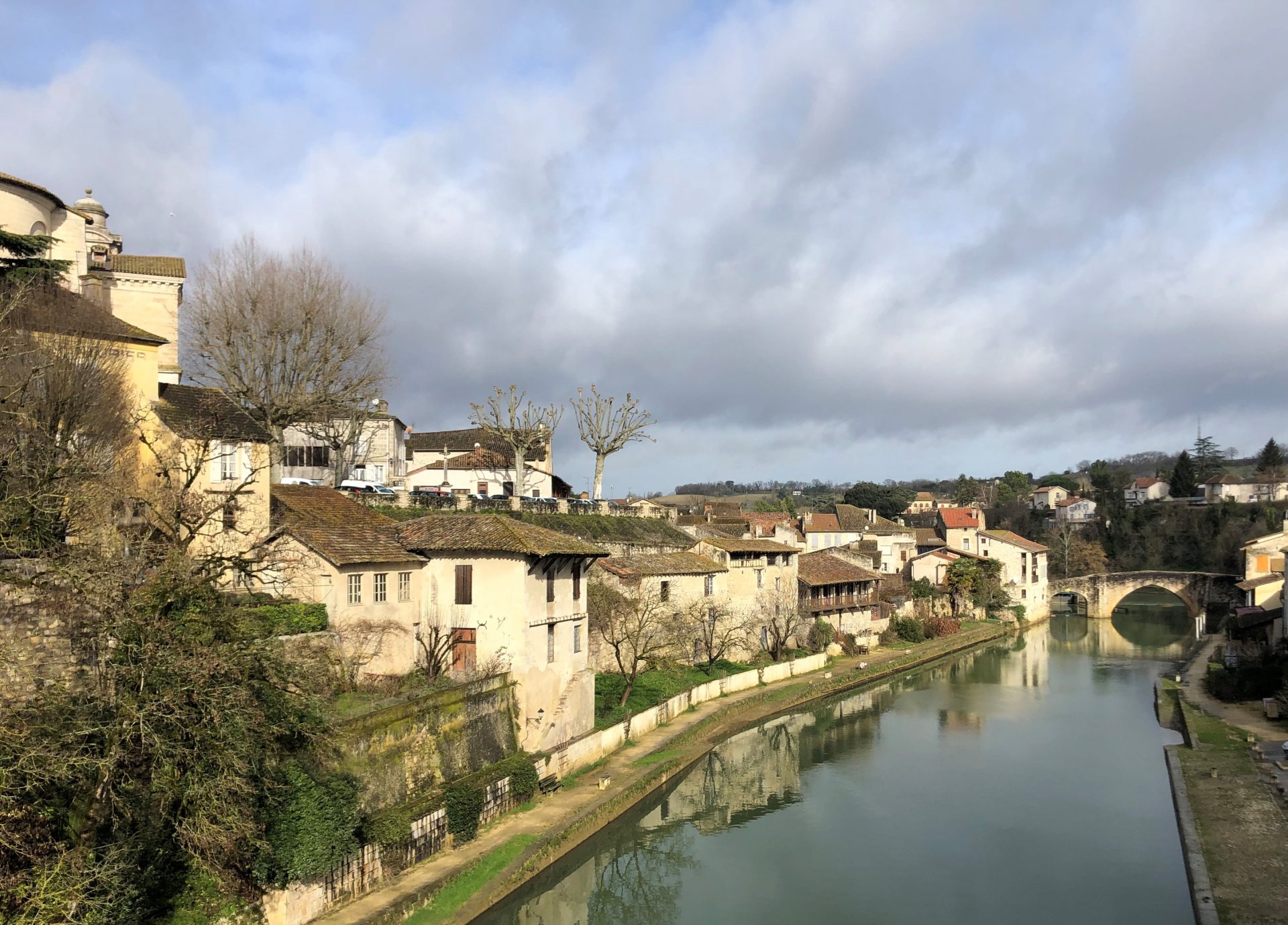 Shortly after moving to the Gers, someone mentioned that this is where Joanne Harris set her best- selling series of Chocolat books, which I like million of other readers had devoured on their release.  I had my own vision of the fictional village of Lansquenet-sous-Tannes which of course differed from the film version of the first book, but also differed from the landscape that I came to know and love in the Southern Gers where we lived before we bought Maison Lamothe.  Indeed my searches on the Internet told me that Lansquenet was actually based on the town of Nerac, which is situated to the north of the Gers in the neighbouring Department of Lot-et-Garonne.

Then last Summer as we walked along the banks of the Canal Entre-deux-Mers in the little town of Valence D’Agen, I could suddenly see Roux’s boat amongst the clutter of boats moored up in the tiny port and walking on a little further I found a little alley called ‘Impasse des Tanneries’.  Didn’t old Mahjoubi build his Mosque down by the tanneries?  As we sat amongst groups of men drinking coffee and aperitif at the busy corner café, I found myself looking for Joséphine Muscat.  I’d found my Lansquenet-sous-Tannes and it was in neither the Gers, or Lot-et-Garonne but in the neighbouring Department of Tarn-et-Garonne.

With the Strawberry Thief, Joanne Harris’s latest release about the inhabitants of Lansquenet still on my ‘to read pile’, I decided to go back to the beginning and re-read the series starting with Chocolat, which I had first read soon after its publication in 1999.  I also vowed to make a visit to Nerac to discover the chocolate shop which Joanne Harris visited often as a child and which proclaims itself to be the inspiration for the books.

Nerac is a beautiful town set on the banks of the river Baïse, the old town is situated on the right bank and the new town which is also known as Petit Nerac on the left bank.  It has a Tanneries Quarter where although now home to art galleries and artisans, one could easily place Les Marauds, the slum quarter of Lansquenet with its ‘close half-timbered houses staggering down the uneven cobbles towards the Tannes.’  But with a population of almost 7,000 and a long proud history that still boasts a beautiful medieval city and a castle that was the home of Henri IV of France, it differs greatly from Lansquenet with its population of ‘two hundred souls at most, no more than a blip on the fast road between Toulouse and Bordeaux’.

And what of La Cigale, the chocolaterie which is now very much on the tourist trail of those on a Chocolat pilgrimage?  Situated not within the medieval city itself but in a utilitarian building in a residential street on the outskirts of town.  And with no window display to speak of, one immediately feels a sense of disappointment.   Surely this cannot be the basis for the magical world of Vianne Rocher?

However step inside and you are immediately confronted with the overwhelming and heady smell of chocolate ‘Try me. Test me. Taste me.’  To the right behind glass windows for all to see are artisans engaged in the art of confecting pralines, truffles, mendicants, hazelnut clusters, candied rose-petals, sugared violets…..And to the left stands an assistant offering a tray of tiny slivers of delicate dainties.  ‘Try me. Test me. Taste me.’  The shop is full of praline bouchées, bars studded with nuts and candied fruit, jars and boxes tied with ribbon and nestling out of sight under layers of tissue paper are 80 different types of chocolate bon-bon.

So where is Lansquenet-sous-Tannes?  It’s in the Gers, and in it’s in Tarn-et-Garonne and Lot-et-Garonne too.  It’s in this little corner of South West France where all three Departments meet and where Maison Lamothe is situated.  Just like the confectioners at La Cigale, Joanne Harris has taken a little bit of this town, a soupçon of that village, a morceau of that hamlet, a sprinkle of another and created a mélange of so many of the beautiful little places around here to make the magical Lansquenet which has so enchanted readers for more than twenty years.

Now I have started looking, I can see bits of Lansquenet everywhere around me.  And if La Cigale gives you the tastes but not the look of Vianne Rocher’s chocolaterie, maybe try Maison Baudequin in Lectoure.